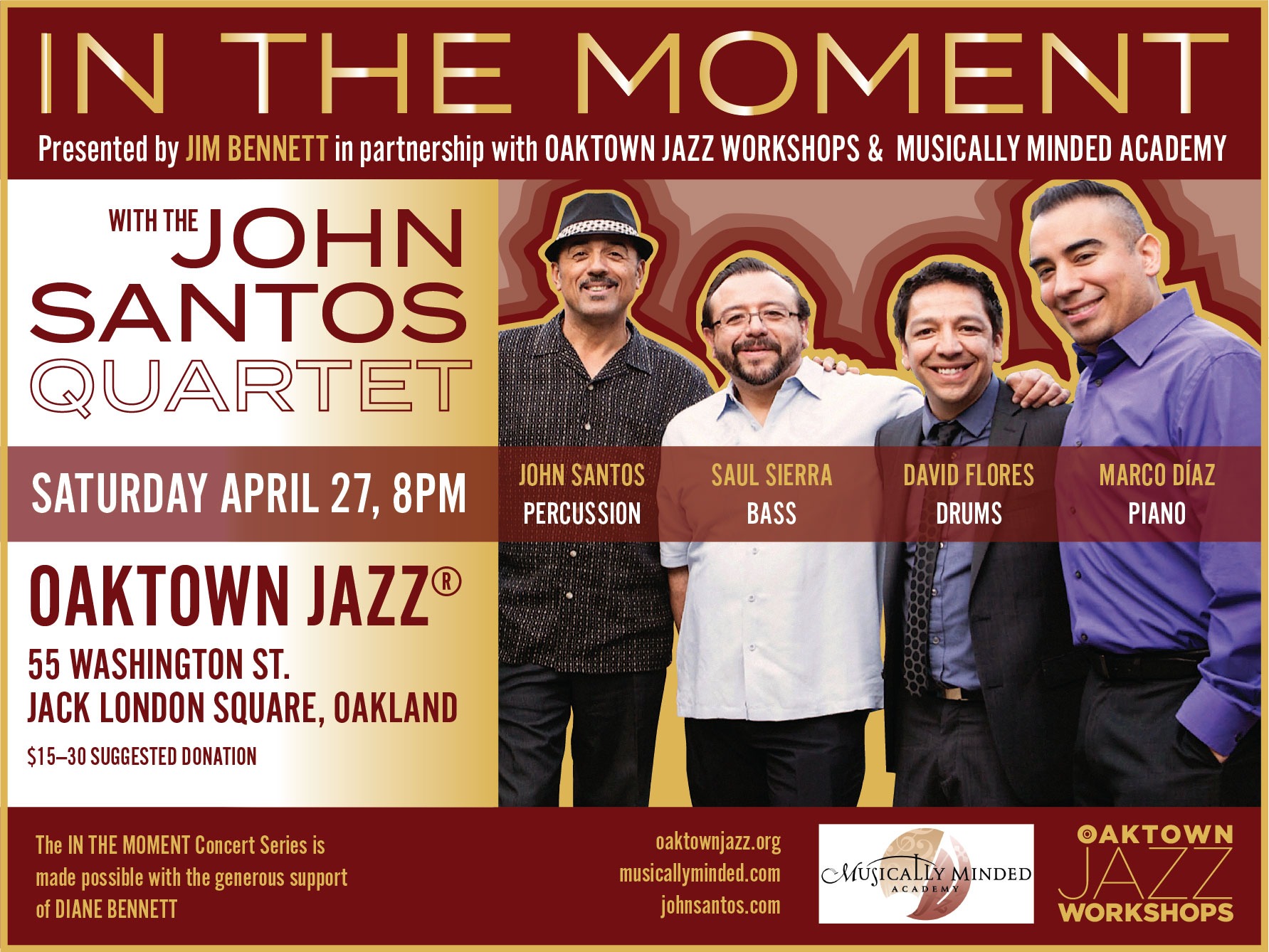 The John Santos Quartet is the Bay Area’s gold standard for small group Jazz Latino. Their vastly diverse repertoire of original arrangements and original compositions is alternately classic, educational, danceable, and highly creative in the hands of these improvisational maestros.
The Quartet presents “Tribute to the Masters” with unique takes on classics from Duke Ellington, Nat King Cole, Johnny Hartman, and Chet Baker, among others.
Seven-time Grammy-nominated percussionist, US Artists Fontanals Fellow, and 2013-2014 SFJAZZ Resident Artistic Director, John Santos, is one of the foremost exponents of Afro-Latin music in the world today. Born in San Francisco, California, November 1, 1955, he was raised in the Puerto Rican and Cape Verdean traditions of his family, surrounded by music. The fertile musical environment of the San Francisco Bay Area shaped his career in a unique way.

John is widely respected as one of the top writers, teachers and historians in the field and was a member of the Latin Jazz Advisory Committee of the Smithsonian Institution. He is currently part of the faculty at the California Conservatory of Jazz (Berkeley, CA), Laney College (Oakland, CA), and the College of San Mateo (CA). He has conducted countless workshops, lectures and clinics in the US, Latin America and Europe since 1973 at institutions of all types including the Smithsonian, the Adventures in Music program of the San Francisco Symphony, the Berklee School of Music in Boston, UCLA, Yale, Stanford, the University of Wisconsin at Madison, the University of Michigan, Temple University, Brigham Young University, Cal Cal State Monterey Bay, Cal State Hayward, the University of Colorado, Yakima Valley Community College, Ohio Music Education Association, the Afro-Cuban Drumming and Dance Program at Humboldt State University (CA), Cal State Sonoma, Cal State Sacramento, Cal State San Jose, Tulane and Dillard Universities of Louisiana, Jazz Camp West, the San Francisco Conservatory of Music, the Los Angeles Music Academy, the Museum of the African Diaspora (San Francisco), the Lafayette Summer Music Program (CA), the Oakland Public Conservatory, and La Universidad Inter-Americana in San Germán Puerto Rico. He has contributed to the international magazines Percussive Notes, Modern Drummer, Modern Percussionist, and Latin Percussionist.

John was the director of the Orquesta Tipica Cienfuegos (1976-1980) and the award-winning Orquesta Batachanga (1981-1985). He was founder and director of the internationally renowned, Grammy-nominated Machete Ensemble (1985-2006), with whom he released nine CDs with special guests from Puerto Rico, Cuba, NY, Los Angeles, and San Francisco, mostly on John’s Machete Records label that was founded in 1984 and continues today. He currently directs the highly acclaimed John Santos Sextet Latin jazz ensemble with five full-length CDs under their belt to date. Papa Mambo was released in 2007. Their second CD, Perspectiva Fragmentada, (2008) was nominated by the Jazz Journalists Association (NY), and by Cubadisco (Cuban Grammys) as one of the top Latin Jazz releases of the year, and selected as one of the five top Latin Jazz CDs of 2008 by New York’s All About Jazz magazine, among many honors. Filosofía Caribeña Vol.1 (2011) received a four-and-a-half star review from Downbeat Magazine! Filosofía Caribeña Vol.2 was released in 2013. Siempre Clásico (2014) features amazing special guests Ernesto Oviedo and Orestes Vilató. John has also produced four full length CDs with his Afro-Caribbean Folklóric Ensemble, El Coro Folklórico Kindembo since 1994, two of which were Grammy-nominated. The most recent, La Esperanza (2011), garnered a four star review in Downbeat Magazine!

The San Francisco Bay Area community in which John still lives and works has presented him with numerous awards and honors for artistic excellence and social dedication. John received the Community Leadership Award from the San Francisco Foundation in 2011. He was presented with the San Francisco Latino Heritage Award in 2012 that included a Certificate of Honor signed by Mayor Edwin Lee, and Certificates of Recognition from the State Assembly, a Certificate of Recognition from the State Senate, and a Certificate of Special Congressional Recognition from the US House of Representatives. He was also selected for the Man of the Year Award by Brothers on the Rise (Oakland, CA) in 2013. A photo of John from 1987 by pioneering Puerto Rican photographer/activist Frank Espada hangs in the National P0rtrait Gallery of the Smithsonian Institution in Washington DC!

John’s work has also been recognized and supported by the Monterey Jazz Festival (2002), the Smithsonian Institution, the California Arts Council, United States Artists, the Zellerbach Family Fund, the Fund for Folk Culture, the Ford Foundation, the William and Flora Hewlitt Foundation, the East Bay Community Foundation, the National Association of Latino Arts and Culture, the Creative Work Fund, and the City of Oakland. The City of San Francisco issued a mayoral proclamation declaring November 12, 2006 John Santos Day. He was featured prominently in the PBS American Masters documentary, Cachao: Uno Mas (2008), and is the subject of another PBS documentary by Searchlight Films (Oakland, CA), currently in progress.

John is an advisory board member of the Afro Latin Jazz Alliance (NY) and the Oaktown Jazz Workshop (Oakland, CA), and a Trustee of SFJAZZ.

This site uses Akismet to reduce spam. Learn how your comment data is processed.