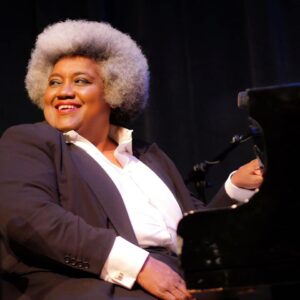 Tammy Lynne Hall began playing the piano at age four, in Dallas, Texas, where she was raised by two grandmothers, a grandfather and numerous aunts and uncles. Her earliest memories of the piano were of climbing onto the piano bench and pick out the notes to tunes she heard either on the radio, record player or something the choir sang at church. Later, Tammy became the pianist not just for the Junior Choir at her home church but also the pianist and organist for her godfather’s church in Terrell, TX, some 40 miles away and she was sometimes the rehearsal accompanist for her school choir from sixth grade at Pearl C. Anderson Junior High to her senior year at the Hockaday School.

It became evident that Music had chosen Tammy to walk its path. Giving full support for this journey were Tammy’s two grandmothers, who pooled their resources to make sure she had access to private lessons from age 8 to 18. Tammy participated in juried recitals, resulting in her winning several awards and honorable recognition in regional and national recitals and competitions. Because of her talent and impeccable academic record, Tammy was encouraged to apply and was accepted to the Hockaday School, where she attended on an academic and musical scholarship, which also led to her attending the prestigious and progressive Mills College in Oakland, CA from 1979 to 1981. Tammy’s grandfather also contributed to her musical journey by showing films of the greats Fats Waller, Dorothy Donegan, Hazel Scott, Duke Ellington and Count Basie; he was one of the first Black projectionists in the country and regularly showed films in his home and at public school auditoriums and churches for the community. These films along with the music she heard on the radio, at church, and the r&b, soul and pop records of the time, even the incidental and theme music she heard on television, all influenced Tammy’s playing. These early experiences would form the triad of Tammy’s core sound: a fusion of Jazz, Gospel and Classical.

In pursuit of developing her own voice and the experiences of a ‘Jazz’ life, Tammy left Mills College and gained more improvisational and accompanying experience sitting in with local bands in the Bay Area when a visit to Brussels turned into a 2 year stay. During this time Tammy along with saxophonist Dr. Josylyn Segal, formed the quintet Touche Differente (Different Touch), playing in venues and festivals including the Brussels Jazz Club and the North Sea Jazz Festival, Antwerp, France, Holland and Ibiza, as well as performing and recording with saxophonist Noah Howard.

In 2017 Tammy received the award for Best Musical Direction from the Bay Area Theatre Critics Circle, for her work in Pamela Rose’s Blues Is A Woman. This is one of several forays into musical theatre as Musical Director, including Sister Act:The Musical (Theatre Rhino), Chance (by Richard Isen), Quantum Janis (in development, also by Richard Isen) and The Boy From Oz.

Tammy’s continued involvement with her musical and cultural community include working as an instructor/lecturer (faculty)/mentor, with a number of schools and non-profit arts organizations dedicated to making music and theatre accessible to under-funded inner city children and well known and funded organizations such as: Adventures In Music (AIM), under the auspices of the San Francisco Symphony in collaboration with the San Francisco Unified School District, The Handful Players Children’s Theatre (San Francisco public schools/Boys & Girls Club of San Francisco), the Drew School (San Francisco), SFJazz Educational Outreach programs (Jazz In The Middle, Jazz In Session, Jazz and Freedom, Jazz and the American Experience), The Oakland Public Conservatory of Music, Alameda Unified School District, Stanford Jazz Workshop, Zellerbach Foundation, Yoshi’s and the Jazz & Heritage Center of San Francisco, Musically Minded Academy in Oakland, the Narada Michael Walden Foundation, VIBO Music in San Francisco and the California Jazz Conservatory – and the world, through Broadway Bound, with workshops and performances in Uruguay, Azerbaijan and Turkmenistan. In 2019 Tammy was recognized by the San Francisco Chapter of the Human Rights Commission, as one of the recipients of its inaugural Pleasant-Leidesdorff San Francisco Community Stalwart Award.

Tammy has also accompanied the Porter College Gospel Choir at University of California, Santa Cruz and is a Co-Minister of Music at Heart And Soul Center of Light, in Oakland, CA. She also is a guest artist/Musical Inspiration for Centers for Spiritual Living throughout California and the country.